Regeneration was the first in a series of modern urban landscapes, featuring a brass frame with plastic-filled cavities, alongside a road sign section. The horse image was recovered from a large billboard discarded in a scrap yard, adding a suggestion of nostalgia to the work’s narrative.

It all started with the chance discovery of a discarded brass frame, clearly used for cutting out parts of some description. Part of the fascination I had with this frame was those curious parts and the shapes they left over. Note, for example, the cactus-like shape top left. I couldn’t, and still can’t, figure out what the parts may have been used for. More fascinating still was the unique shapes left by the cut outs. Straight away, I was able to see a way to incorporate it into my work. 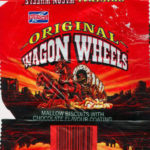 The horse may be recognisable to some people of a ‘certain age’. It came from an old ‘Wagon Wheels’ bill board. I searched for a representation of this but the best I could do was the packaging but the horse in question is clear.

What I wanted to create here was an impression of the city landscape phenomenon that is urban regeneration, hence the title. The familiar scene is where a plot of land has been earmarked for development alongside, and often sweeping aside, the billboards and graffiti fences and walls. I also wanted to show how developers attempt to blend their new environments with their older and more characterful surroundings.

‘Regeneration’ was completed in March 2018 and first appeared in the joint exhibition with Keith Paton in the Dundas Street Gallery in May 2018. It was selected to be shown at the SSA Annual Exhibition 2018.

I have incorporated the brass frame into two more pieces: ‘Assimilation’ and ‘Flyover’, which follow a similar urban-based narrative as ‘Regeneration’.